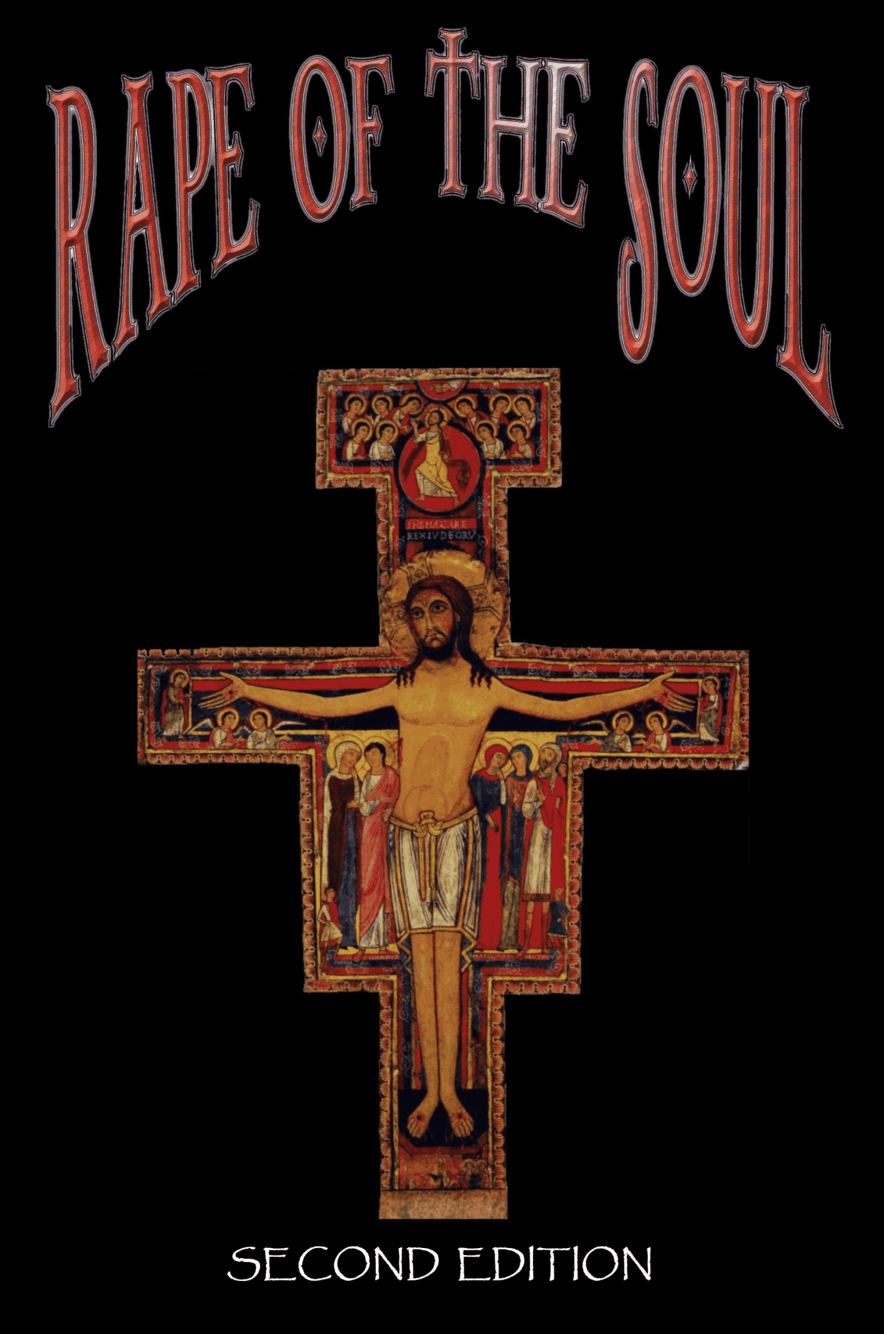 Historical and contemporary religious artworks are profiled containing embedded sexual and demonic imagery via stunning pictorials with expert analysis and visual evidence, as a fuel for the ever growing church abuse scandals, directly exposing its network of perpetrators. With bonus features and coverage.
Feature Documentary (108 mins)

Directed by: Michael A. Calace
Narrated by: Robert Swan

"It is better that scandals arise, then that the truth be supressed."

The new documentary “Rape of the Soul: Second Edition” released worldwide by SSI, features one of the most celebrated symbols of the Catholic Church, exposed as a fuel of the intensifying sexual abuse scandal crisis.

“The heavily marketed original San Damiano crucifix that St. Francis of Assisi prayed to and which he said spoke to him, clearly depicts an erect penis with testicles, and has been copied and redistributed throughout the world,” asserted embed art expert Michael A. Calace.

The investigative documentary profiles what negative programming effects occur through both subconscious and conscious stimulation, evidenced via embedded sexual and horror imagery in art, while exposing those who continually requisition and promote such imagery in combination with the emotional element of religion, and then resort to coverup tactics.

Notable former professor, author and visual media analyst Dr. Wilson Bryan Key warned, “The negative affects you can measure, you can observe, and you can validate. Everything goes into your brain.”

Featuring Dr. Judith Reisman, an expert consultant for the US Department of Justice, Education and Health and Human Services said, “Is it predatory? You bet it is. Is it planned? Of course it is. Is it successful? With the society we have today, it certainly is.”

Throughout the movie, embedded sexual, satanic and demonic imagery in many historical and contemporary artworks are stunningly exposed, extracted and detailed with visual proof and expert analysis, showing the ongoing abuse scandals of the church being fuelled by specifically ordered and promoted blasphemy.

The Oregon Catholic Press (OCP) while under the watch of publisher John Limb, distributed a music issue with the cover art depicting suicide by firearm on a colourful morphed cross aimed at children, heavily distributing it since 2004 and still continuing to remain with vast multitudes, as shown in the new feature film documentary that exposes embedded imagery in art, “Rape of the Soul: Second Edition” produced by SSI.

World renowned embed art expert Michael A. Calace stated, “This OCP message is clearly suicide, showcasing a gun revolver chamber with an exploding satanic head, plus three faces with open mouths, a bullet hole in a head, along with a 666.”

Even with its exposure, the OCP did not recall the music issue. Some archdioceses added an adhesive sticker in an attempt to cover up the scandal, yet the exact same suicide image is also openly printed on the back cover.

Dr. Judith Reisman, an expert consultant for the US Department of Justice, Education, Health and Human Services, and who is also one of several experts featured in the film stated, “The viewer becomes mesmerized from the negative programming effects of the imagery and can act that out.”

The Second Edition film shows that the OCP persistently continues with this same horror reminiscent of notorious former Marianist Brother Steve Erspamer, who also continues to be promoted by the OCP, by further offering his occult imagery.

John Limb ultimately stepped down, and his OCP replacement publisher Wade Wisler still has not revoked the music issue, while the OCP simultaneously continues to glorify Erspamer’s shocking artwork, issuing the convoluted statement, "The hymn of God's praises that rises from the works."

Erspamer continues to operate and distribute his demonic craft with protection from the Catholic Church, even after he was shuffled from his location and changed his name from Steve to Martin when his artworks were extracted and exposed.

“Through its massive publishing and distribution network, the Oregon Catholic Press still consistently provides fuel for the church abuse scandals crisis and is one of several major organizations exposed in the film with clear visual proof, promoting such horror and blasphemy,” said Mr. Calace.

A multitude of global historical and contemporary sexual and demonic religious works are visually profiled and extracted with expert analysis in Rape of the Soul: Second Edition, now viewable online worldwide.

Rape of the Soul:
Second Edition